The ANCHORED STANDARD Vi joint is a push-in anchored joint for laying anchoring pipes.
The anchoring is designed to take up axial forces and allows laying without the need for concrete blocks.
It is suitable for UNIVERSAL STANDARD double chamber socket pipes and smooth spigot ends.
Range: DN 80 to 600 (pipes). 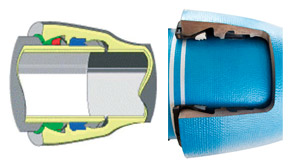 The basic principle of anchoring joints consists in transmitting the axial forces from one pipeline component to the next, thus ensuring that the joint does not come apart. The inserts in the UNIVERSAL Vi anchoring gasket hook onto the pipe spigot, and thus avoid having to install concrete anchoring blocks.
This anchoring system also avoids the need for a weld bead on the spigot, and so can be used with all smooth spigot ends and in double-chamber sockets.

The UNIVERSAL STANDARD Vi joint requires the use of UNIVERSAL STANDARD pipes with double chamber socket.
Leaktightness is provided by a STANDARD joint gasket.
The axial force transmission takes place through an anchoring ring with inserts embedded in the elastomer. They hook onto the spigot end when the pipe is pressurized, thus ensuring joint anchoring.

The UNIVERSAL STANDARD Vi joint is not suitable for pipes in FGL iron (grey iron).

UNIVERSAL pipes with DN 80 to 600 to be used with UNIVERSAL fittings with similar DN (except DN 350 and 450, use fittings with STANDARD joint and STANDARD V+i anchoring solution.)

Anchored joints are of particular interest in congested conditions that preclude the construction of concrete anchor blocks, or in poorly cohesive soils.

The leaktightness of these joints relies on the proven qualities of push-in joints.

The UNIVERSAL STANDARD Vi joint cannot be disassembled after pressure has been applied.

Joints
Range of joints
Anchored joints
PAM’s anchoring solutions are designed according to two different levels of performance, plus a supplementary range to cater for some specific situations.
@back_to_top
Filter products